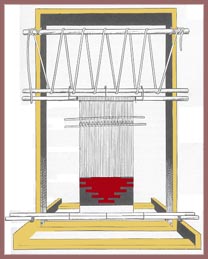 When the weaver has ascertained the size of the rug that is to be woven, the warp thread is chosen. The warp thread is prepared during the spinning process, and in almost all cases the threads are natural wool. The warp thread serves as the foundation of the rug, and a tight thin yarn is best. The warp must supply both strength and resistance to abrasion caused by the fork, and support the total body of woven wefts.

The stringing of the warp is done in a warp frame, a temporary device separated from the loom proper, consisting of two long boards forming the sides and two securely tied crosspieces, usually of 1″ dowel or broomstick size, at each end. Four nails hammered into each end of the two long boards with heads protruding 1”,will serve as a brace for the dowels, and facilitate lashing the dowels tightly to the long boards, with rope or heavy twine. The warp frame is laid horizontally on the ground, elevated a few inches at the four corners, by equal sized bricks, blocks of wood, books, rocks, etc. Clearance beneath the frame should allow free rolling of warp. If there is sufficient room inside the warp frame, considering the size of the planned rug, the weaver can begin the stringing, situated inside the enclosed area.

The Navajo warp is one continuous strand that is wound in a figure-eight pattern at approximately 1/4″ intervals, around the two dowel crosspieces. This interval will result in 8 warps per inch. To begin, a loop secured with a square knot is tied 2” inside the first dowel, and the finish is secured in the same manner, a loop and square knot, and on the same dowel. Constant tension of the warp is maintained as the strand is passed over the dowel on the outside and returned under the dowel on the inside, thus creating warp pairs. The two figure eight patterns created are called sheds, and are established by the insertion and tying of two sticks, called shed rods, into the warp pattern. During actual weaving, manipulation of the shed rods creates the needed spaces for passing of the weft thread. Shed rods are two willow sticks or ¼” dowels, measuring at least several inches longer than your intended weaving is wide. After warping, insert a shed rod in each side of the figure eight, and slide them toward the center. Tie the shed rods snugly together at each end with twine.