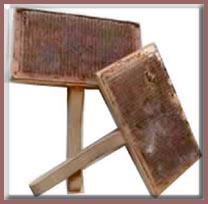 The shorn wool is hand cleaned of burrs and other debris. Then it is washed and dried in the sun.

The Navajos clean their wool before spinning it into yarn, sometimes by washing it in yucca-root suds, but more often by merely shaking out the sand and picking out burrs and twigs. These roots are beaten between rocks until reduced to a mass of fibers, and are then splashed up and down in a bowl of water until the mass of fibers becomes covered with a rich and soft, foamy lather. The wool is soaked in these suds and essentially thoroughly washed, depending on the custom of the weaver. If the weaver is desirous of doing first rate work, she well knows the washing must be done well, or the dye will not take adequately. In the case of white, black, brown and native gray wool, which is to be used without dyeing, the careful weaver is especially particular to see that the wool is thoroughly washed.

A bucket of water is first poured into a washtub, and the weaver throws the fleece in and lets the wool soak. She empties the dirty water and repeats this cold-rinse process several times. Next, the weaver washes the fleece, adding warm water from the kettle on the stove. This time she uses detergent or yucca-root suds, rinses the fleece, and hangs it out on a nearby fence. The fleeces are then spread out on whatever shrubs are closely available to dry. After a few hours, the warm sun has dried the fleece, and it is ready for carding.

In early times, some weavers maintained that washing the wool knotted it, making it lumpy and difficult to card, and that only in the rare instance when wool is too dirty to dye is it washed. More commonly it was laid on a rock in the sun and vigorously beaten. Washing, although uncommon in early times, has gradually become the practice.

The Navajo-Churro sheep has a lustrous, long, open type fleece, with little shrinkage and a lower grease content than most improved wools, thus the percent of clean wool is high as dirt does not adhere to the fibers as easily.