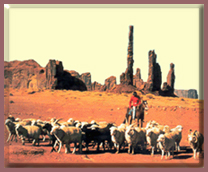 Domestic sheep are easily seized, and shearing or clipping obtains their wool. In very early times, shears were the exception rather than the norm, the Navajo either pulled the wool from the animal or used flint knives for shearing. Prior to the introduction of shears, metal knives or sharp-edged metals such as a sheet of tin were used, probably replicating the Spanish settlers, who had a special knife for the purpose. Modern steel shears now clip the fleece in a solid blanket from tail to head.

Shearing of sheep usually takes place in the late spring or early summer when the wool is thickest. The Churro can usually be shorn twice a year, rather than the conventional practice of annual shearing. The wool comes in natural colors, including apricot, grey, black, brown, beige, and white, and the wool is decidely prized by hand-spinners.

The Navajo weaver throws a lasso around the sheep’s head, and pulls him away from the herd. She ties his legs together and gently pushes him over on his side. Holding his head in one hand, the weaver takes her long metal shears and begins cutting wool in the sheep’s chest area. Over and over, the shears clip, cutting sections of the animal’s fleece free. After the wool is removed from the chest, she snips the wool from the shoulders and hind legs. Shearing the fleece with one hand, she holds the solid wool piece in the other. With one side finished, the sheep is flipped over. When the second side is shorn, she gives the sheep a pat on the back and unties his legs.

In the beginning any sharp edged tool was used for shearing. By the late 1800’s metal shears were available through trading posts and the hiring of professional shearers who worked for a share of the wool developed into a common practice. Shearing doesn’t hurt a sheep. It’s just like getting a haircut. However, shearing requires skill so that sheep are shorn efficiently and quickly without cuts or injury to the sheep or shearer. A professional shearer can shear a sheep in less than 2 minutes and will remove the fleece in one piece.