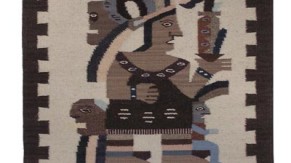 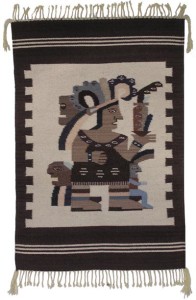 This handwoven Zapotec Mexican rug is 100% wool and a finer Zapotec weave, resembling the classic Pictorial Navajo rug. Pictorial Navajo blankets and rugs stem from late nineteenth century attempts by Navajo weavers to record the images they saw in the world around them, and the pictorial weaver often records what she sees. These Zapotec figures appear to be nobility or deity, and bearing ceremonial embellishments.

In recent years, Zapotec weavers, indigenous to central Mexico, began reproducing simplified versions of Navajo textiles; that can be sold at a much lower price than a truly authentic Navajo rug or blanket. Zapotec weavers have their own tradition of rug and blanket manufacture that is even older than the Navajo. Most scholars of pre-Columbian and American Southwest history, believe that many of the geometric design elements one finds in the Navajo textile patterns have their origin in link with the Aztec and Zapotec cultures of central and southern Mexico. The southwestern United States and Mexico are not viewed as two culturally distinct regions; but as a heterogeneous yet unified cultural area, in which deep-rooted regional traditions are linked by common beliefs and art.