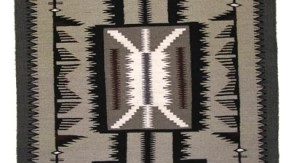 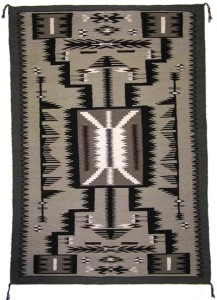 This newly handwoven Storm pattern Navajo rug is 100% wool, and includes a functional but easily removable strip of maple backing along the 62 in border, to facilitate lengthways display as a wall hanging. The weaver, David Naigo of Whippoorwill Az, is a member of the Navajo Rug Weavers Association, and the rug includes the Navajo Rug Weavers Association Certificate of Genuineness.

Click on the Rug Image for a close up view and accurate representation of the dark red color enhancing this rug. The shades of gray and black in this full rug view are accurately depicted, but the highlighting maroon/dark red color is not clearly visible. Both the center hogan, and smaller boxes at each corner of the rug, contain maroon accents on each side of the design. Additionally, maroon color is attractively integrated in all the feather like and water bug designs immediately within the entire surrounding border.