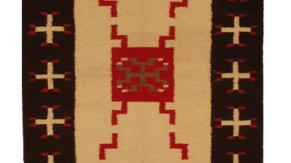 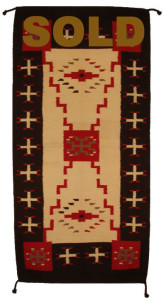 This wool Indian rug replicates the classic Storm Navajo rug. The Storm pattern was accepted as a Navajo rug weaving style in the 1950’s. Typically bordered Navajo rugs rendered in black, white, gray and red color combinations, Storm is a distinctive pattern originating in the Tuba City area or western half of the Navajo Indian reservation. Basic features in the pattern of Storm Navajo rugs include a center box or square, which is described as a hogan or center of the world; smaller boxes at or near each corner of the rug, called houses of the wind or sacred mountain; and four zigzagged lines representing lightning, connecting the center square to each smaller corner box. Two figures, symbolizing water bugs or pinon beetles lie at center top and bottom of these Navajo rugs.

Due to the steady increase in demand and value, in recent years, of Navajo rugs; Nepal weavers, indigenous to India and Tibet, began successfully replicating Navajo textiles; and produce a high quality reproduction, but at a much lower price than a truly authentic Navajo rug or blanket. The Tibetan-Nepalese weavers also have an old tradition of textile manufacture. The first written evidence of weaving in Nepal, is in the Indian sources of the Asoka period, in the second century AD. The rug weaving industry spread around Nepal in 1959, when 15,000 Tibetan refugees settled in Nepal, especially inside the Kathmandu Valley. Master weavers from Gyantse, the best carpet making area of central Tibet, who settled in Nepal eventually taught their skills to others, resulting in an increase in production of high quality hand-woven rugs. By mid 1970, the rug weaving business was firmly established and continues to grow today.