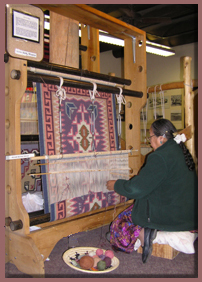 Navajos say they learned to weave from Spider Woman on a loom constructed according to directions given them by Spider Man. A less interesting but more commonplace view is that weaving as performed by the Navajos is an accomplished art, originally learned from the Pueblo Indians in the mid-seventeenth century.

The tapestry weave technique has been the prevailing Navajo weaving technique for the most recent two hundred years. In tapestry weave the weft elements are packed down so tightly that the warp is not visible. In weaving, the vertical threads held in place on a loom that form the foundation of a fabric are the warp threads; the horizontal threads that are passed over and under the foundation warp threads, are the weft threads. The shed is an opening between two sets of warp strings, or a gap where the weft can pass through from one side to another. These weft threads are the threads you see, and cover the warp threads.

The weaver of a simple, over and under tapestry weave rug will use two heddle rods; one tied to alternating warp thread, the other, a loose untied heddle, is inserted between the other warp thread. This latter heddle is used to pull forward the even warp threads. Thus by pulling one heddle, all even numbered warps are brought forward and separated from the odd numbered ones. These threads are held apart by insertion of a batten, an 10 to 24 inch flat wood piece, thus creating the shed. The weaver then loosely lays in her weft and packs it down with the fork. Secondly, by pulling the rear set of warps forward with her batten, the weaver creates and maintains a second shed, and repeats the process of laying in her weft in the opposite direction. Changing the color of the weft yarns creates patterns. An experienced weaver can expect to complete up to one square foot of weave per day; depending, of course, on the complexity of the design and the fineness of the weave. This fineness can vary from six to more than one hundred weft elements per linear inch.

Many Navajo rugs begin and end with a cluster of horizontal stripes. The more complex patterning of the rug begins and ends several inches in from the ends. Some weavers say they plan their design in this fashion since it is much easier to end the rug in a plain stripe area.

Unlike her Pueblo teachers, the Navajo weaves a small area at a time, usually determined by her reach. She often changes from one color to another, before physically moving to weave in the next area of textile. This technique results in visible lines in the weaving, which are called lazy lines and are not related to the pattern itself.