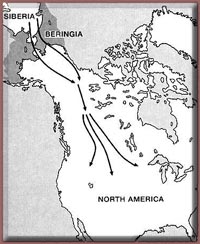 At the height of the last Ice-Age, Pleistocene Epoch, Alaska lay at the eastern end of the Bering Land Bridge. More than just a bridge, this dry land connection between Asia and North America was 1,000 miles wide and extended from the Alaska Peninsula north and east as far as the western Yukon Territory. Alaska comprised most of the eastern portion of a large sub-continent called Beringia that was made up of northeastern Siberia, the Land Bridge, Alaska, and part of the Yukon Territory. Until some time between 10,000 and 9000 years before present, humans and animals could walk across the Bering Strait on land which today is covered by 50 meters of ocean water. Biological and archaeological evidence show that humans evolved in the Old World and subsequently migrated to the New World. In order for ancient humans to migrate in numbers sufficient to maintain a biologically viable population, they would have used a route that permitted access by groups – the Land Bridge. Since that determination was made, a perennial subject of archaeological debate has been when did humans first cross the Land Bridge?

Beringia existed because of a world-wide lowering of sea-level due to the vast amount of water locked up on the surface of the earth in huge continental glaciers. In all probability the Arctic Ocean remained frozen throughout most of the last Ice-Age creating an extreme continental climate in Beringia which contained practically no atmospheric moisture. It was probably the far north’s lack of an open ocean that made Beringia habitable at a time when everywhere else in North America north of 43 degrees latitude was buried under glacial ice. The limited atmospheric moisture resulted in few clouds and little precipitation. The summers were sunny and warm and the rains were limited. While the winters were extremely cold the snowfall was light, keeping all but the mountain ranges free of glacial ice. These circumstances, primarily tied to the lack of oceanic influence, were responsible for the conditions which allowed the flow of animals between the two continents throughout the 1.6 million year-long Pleistocene Epoch, as well as the migration of humans from Asia to North America at the close of the Pleistocene.

Although the Bering Land Bridge existed at various times during the Pleistocene it was only during its most recent period of exposure (30,000 to 9,000 years before the present) that it was utilized by humans. Prior to 30,000 years ago the technology necessary for humans to survive in the Arctic had not been developed. Although anatomically modern humans may have been present in the temperate latitudes of the Old World since about 100,000 years prior, North America remained unaccessible because the continental connection lay deep within the harsh Arctic environment. The ability of humans to live in the Arctic was predicated on one of the simplest pieces of technology ever invented, the eyed needle. For humans to survive in the Arctic they must be able to make tailored, weather-tight, clothing and shelter, the manufacture of which requires an eyed needle and a sophisticated sewing technology. Evidence of the needle in the Old World archaeological record first appears in Russia’s trans-Baikal region (northern temperate latitudes) about 30,000 years BP. However, it is not found in the Siberian Arctic until much later.