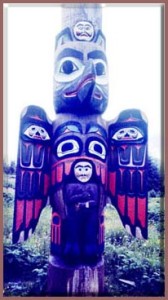 Although these four groups are neighbors, their spoken languages were not mutually intelligible. Eyak is a single language with only one living speaker. The Tlingit language has four main dialects: Northern, Southern, Inland and Gulf Coast with accent variations in each village. The Haida people speak an isolate language, Haida, with three dialects: Skidegate and Masset in British Columbia Canada, and the Kaigani dialect in Alaska. The Tsimshian people speak another isolate language, Sm’algyax, comprised of four main dialects: Coast Tsimshian, Southern Tsimshian, Nisga’a, and Gitksan.

Eyak occupied the lands in the southeastern corner of southcentral Alaska, running along the Gulf of Alaska from the Copper River Delta to Icy Bay. Oral tradition tells us that the Eyak moved down from the interior of Alaska via the Copper River or over the Bering Glacier during the 18th century. Previously, the Eyak were more closely associated with their Athabascan neighbors to the north than the North Coast Cultures.

Tlingit inhabit the Southeast panhandle of Alaska from Icy Bay in the north to the Dixon entrance in the south. Another Tlingit group, the Inland Tlingit people have occupied the area to the east inside the Canadian border dating back 10,000 years.

The original homeland of the Haida people is the Queen Charlotte Islands in British Columbia, Canada, some Haida migrated north to the Prince of Wales Island area within Alaska. This group is known as the “Kaigani” or Alaska Haidas, and the Kaigani Haida live primarily in two villages, Kasaan and the consolidated village of Hydaburg.

The original homeland of the Tsimshian stretched between the Nass and Skeena Rivers in British Columbia, Canada, and later also in Southeast Alaska’s Portland Canal area, villages at Hyder and Halibut Bay. Presently, the Tsimshian live primarily on Annette Island, New Metlakatla, Alaska and in Canadian settlements.

The region from the Copper River Delta to the Southeast Panhandle is a temperate rainforest with precipitation ranging from 112 inches per year to almost 200 inches per year. Here the people depended upon the ocean, rivers and forest for their food and travel. This environment produces many tall and massive trees. Wood was the most important commodity for the people; providing their houses, totem poles, daily utensils, storage and cooking boxes, transportation, ceremonial objects, and labrets worn by high status women. All clothes were made of wood and wood products. The tools to make the wood into usable items were adzes, mauls, wedges, digging sticks and in later years, iron. To cut the wood people used chipped rocks, bones, beaver teeth, and shells. For light, the Eyak used a clamshell with seal oil or pitch, and a lump of fat for a wick. Dried ooligan were used as candles, and hollowed sandstone with cotton grass were fashioned into wicks.

Traditionally, clans owned the salmon streams, halibut banks, berry patches, land for hunting, intertidal regions, and egg harvesting areas. As long as the clan used the area, they owned the area. The food was seasonal and therefore had to be preserved for the winter months and for early spring. The food was preserved by smoking in smokehouses or drying in the wind or sun. These subsistence patterns are still a crucial part of Southeast Alaska Native people’s cultural identity.

Each local group of Eyak, Tlingit, Haida and Tsimshian had at least one permanent winter village with various seasonal camps close to food resources. The houses accommodated 20 to 50 people, usually of one clan. Eyak dwelling houses were unmarked. The southern Tlingit built tall totem poles in front of their houses, the northern Tlingit built fewer and shorter frontal totem poles. The people established winter villages along the banks of streams or along saltwater beaches, to provide easy access to fish-producing waters. Winter villages were located so as to allow protection from storms and enemies, and also provide drinking water and a place to launch canoes. Houses were built facing the water with their backs to the mountains or muskeg/swamps, and most villages had a single row of houses.

All four groups were composed of clans, and married outside their own group. Children traced their lineage and acquired names from their mother, not their father. The children inherited all rights through their mother, including the use of the clan fishing, hunting and gathering land, and the right to use the clan crest on totem poles, houses, clothing, and ceremonial regalia.

Traditional ceremonies were and are still essential and important to the Eyak, Tlingit, Haida and Tsimshian people’s cultural identity. The Eyak, Tlingit, Haida and Tsimshian are known for a ceremony called the “potlatch”, a formal ceremony including a feast. An Eyak village, included two potlatch houses, each with an outdoor post topped with the Eagle or Raven. Haida feasts, a less formal but similar event, were common when debt was paid to another clan.

High-ranking Eyak, Tlingit, Haida and Tsimshian clans or individuals were expected to offer potlatches. However, a potlatch could be given by a commoner who could raise his position or that of his children by doing so. Potlatches were held for many occasions: a funeral or memorial potlatch honoring the dead; witness and validation of payment of a debt; the completion of a new house; completion and naming of clan regalia; a wedding; naming of a child; erection of a totem pole; or to rid the host of shame. Potlatches might last days and would include feasting, speeches, singing and dancing. Guests witness and validate the events and are paid with gifts during the ceremony. In potlatches, there would also be a feast; however, a feast does not necessarily constitute a potlatch.

Regalia worn at potlatches included the Chilkat and Raven’s Tail woven robes, painted tanned leather clothing, tunics, leggings, moccasins, ground squirrel robes, red cedar ropes, masks, rattles, and frontlets. Drums, rattles, whistles, paddles, and staffs were also used at potlatches. Only clan regalia named and validated at a potlatch could be used for these formal gatherings. Chilkat robes were made of mountain goat wool and cedar warps. The Chilkat weaving style is the only weaving that can create perfect circles. The Nass River Tsimshian are credited with originating the Chilkat weaving technique, which subsequently spread throughout the region. The Raven’s tail robe was made of mountain goat wool. Some of the headpieces contained frontlets decorated with sea lion whiskers and ermine. In later years, robes were made of blankets, typically obtained from the Hudson Bay trading company, and adorned with glass beads, mother-of-pearl, dentalium, and abalone shells.