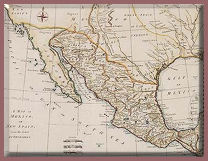 The ancient Camino Real, or Royal Road was an 1,800 mile trail that connected Mexico City to Santa Fe. Although it was the first European road in the nation and used by some of the earliest European settlers, the Camino Real has languished in the shadow of other historic trails, such as the Oregon and the California. This ancient trade route supplied Navajo, Apache, other Southwestern Indians and the Puebloan world with cultural contacts and trade among neighboring tribes and the greater Mesoamerican world. Foodstuffs, hides, livestock, woven blankets, tools, jewelry, and people made their way back and forth across the frontier, along the canyons of the Gobernador.

By 1608, Navajo and Apache raids on villages and towns across the region brought Spanish mounted soldiers across the border. By 1659, captive Navajo men, women and children were being sold along the Rio Grande and sent south to work in silver mines south in Zacatecas. Life became extremely dangerous in Dinetah. During the latter part of the 1700s the Spanish created alliances with the Comanches and Utes, and these combined with various French, Pawnee, and Pueblo interests were aimed at weakening and defeating the Navajos. Atrocities were committed on all sides. Constant raiding and slave-taking occurred. It is estimated that during the early 1800s more than 66 percent of all Navajo families had experienced the loss of members to slavery. Navajo children were taken from their families and sold at auction in Santa Fe, Taos, and other places. Others were sent deep into Mexico to work in the silver mines. Most never returned. Many Navajo families retell stories of slaves taken or escaping during this time.

A network of ancient Indian Trails predated the Spanish Camino Real. By this means the Puebloan world received its cultural contacts and maintained a complex of trade patterns with neighboring tribes and with the greater Mesoamerican world. The West Mexican Interior Trail connected western Mesoamerica with the sophisticated Chalchihuites culture of Durango and Zacatecas. This route joined a much traveled interior trunk line which brought goods from the west coast of Mexico. Sometime after A.D. 1000 the West Mexican Interior Trail was linked to the great trading center of Casas Grandes in western Chihuahua, which flourished during the 13th and 14th centuries. It quickly became the primary redistribution center for the goods moving into the upper Southwest.

One of the important northern segments of the Casas Grandes Trail was the Rio Grande Pueblo Indian Trail extending from around El Paso to the upper Rio Grande. By the end of the 15th century Casas Grandes was in ruins and its roadways fell into disuse. However, the Rio Grande segment remained intact and quickly became incorporated into a second interregional trail system. As Casas Grandes declined, vigorous trading communities arose in the mountain valleys of northern Sonora. About mid-14th century, these became anchor points in a trail connecting the Southwest with western Mesoamerica. Within a century this West Mexican Coastal Trail was the major route from the Mexican heartland to the basin and range country of southeastern Arizona and to southwestern New Mexico, with its northern terminus at modern Zuni. Two major trunk lines connected this route to the Rio Grande Pueblo Indian Trail. These ancient trade routes supplied Southwestern Indians with important trade goods. Up from the south came marine shell, parrot and macaw feathers, and copper objects (particularly copper jingle bells). Down the trails from the Southwest went turquoise, peridot, serpentine, garnet and other semi-precious stones, pottery, salt, meerschaum, alibates flints, processed bison products and perhaps slaves.

Indian trails quickly attracted Spanish attention, and Spanish parties began using them for slave trading raids as early as 1530. Later the Spanish expeditions marched over these routes in their conquest of the Southwest. When the Spanish established control of New Mexico, the Rio Grande Pueblo Indian Trail became the upper part of the Camino Real. Over the next two centuries, Spanish colonists and Pueblo communities would trade with Apaches and Navajos in some years, and suffer raids in others. Foodstuffs, hides, livestock, woven blankets, tools, jewelry, and people made their way back and forth across the frontier, along the canyons of the Gobernador. By 1608, Navajo and Apache raids on villages and towns across the region brought Spanish mounted soldiers across the border. By 1659, captive Navajo men, women and children were being sold along the Rio Grande and sent south to work in silver mines south in Zacatecas.

In November of 1518, Hernan Cortes sailed from the port of Santiago de Cuba to carry out the conquest of Mexico. In the spring of 1519, a runner reported to the Emperor Moctezuma that ‘two floating mountains’ and strangely dressed men had appeared on the coast of Mexico. Attracted by bountiful gifts sent by the Aztec emperor, Moctezuma, gifts meant to appease the Spaniards and turn them back, Cortes and his six-hundred men stayed on to found the port of La Villa Rica de la Vera Cruz. From there an expedition marched on the highland heart of the Aztec Empire, Tenochtitlan, the site of present day Mexico City. At first forced to retreat, Cortes returned later to the capital with numerous Spanish reinforcements and Indian allies and, after a five-month siege, defeated the new Aztec leader Cuahtemoc. Thus, the stage was set for the establishment of the Vice-royalty of New Spain.

Alvar Nunez Cabeza de Vaca was appointed to the Panfilo de Narvaez expedition in 1527, which came to a disastrous end in Florida. Cabeza de Vaca and three companions, the only survivors, found their way back to Mexico after eight harrowing years, having traversed the unknown wilds of Florida, Texas, and northernmost Mexico. The marvelous tales of Cabeza de Vaca’s wanderings caused much excitement. The Spaniards were spurred on to new conquest. They were sure, just over the next horizon, lay more wealth and more exotic civilizations waiting to be conquered.

In 1540, Francisco Vasquez de Coronado set off for Arizona, accompanied by 292 men, 1300 Indian allies, several friars, 1,000 horses, 600 pack animals and supplies. Coronado’s men were the first to see the Grand Canyon, to explore Hopiland, and to penetrate as far east as Kansas. Coronado’s expedition spent the winter of 1541-42 near present-day Bernalillo south of the great 1,200 room pueblo of Kuaua. Soon their arrogant conquerors’ assumptions brought them into armed conflict with the Indians. The Coronado expedition returned to Mexico, their hopes shattered, for they had entered ‘the great wilderness’ and ‘seeing nothing were down-hearted.’

By the mid-1570’s, the rich mining district of Parral in southern Chihuahua had been settled and served as a staging area for future explorations. In Santa Barbara in 1581, Fr. Agustin Rodriguez heard of an advanced civilization to the north. Given official permission to evangelize, he set off in 1581 with a small party under the command of Captain Francisco Sanchez Chamuscado. The party reached the vicinity of Socorro in August and for the next five months explored the Rio Grande pueblos. Leaving behind two priests to continue religious conversion, the main party returned in 1582. The Spaniard Antonio de Espejo, caught up in the excitement caused by the returning Chamuscado-Rodriguez expedition, decided to personally underwrite the costs of an expedition. In 1582, he led a small group to New Mexico, only to learn that the friars he had hoped to succor had been killed. The reports, written by Espejo, and by expedition member Diego Perez de Lujan upon their return to Mexico, added to a growing fund of information about the pueblo people of New Mexico.