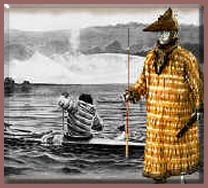 The area stretching from Prince William Sound west along the Gulf of Alaska to the Aleutian Islands is home to the Aleut and Alutiiq peoples. The Aleut, or Unangan, as they call themselves, inhabit the Aleutian archipelago, a 1,300-mile-long volcanic island arc extending from the Alaska Peninsula west nearly to Kamchatka. There are also over 300 Aleuts in Nikolskoye on Bering Island, Russia. The Russians first called these maritime hunters “Aleuts,” the meaning of which is unknown; their name for themselves Unangan translates “the people”.The natural marine environment defines subsistence lifestyles and cultures that date back more than 8,000 years. Although racially and ethnically related to the Eskimo, the Aleuts have their own language and culture. The Aleuts and the Alutiiq differ in language and culture but a commonality was created from the first contact with the Russians in the 18th century that is evident today. The Alutiiq language, called Sugcestun or Alutiiq, is one of the Yupik branches of the Esk-Aleut language family. The Alutiiq are known for being expert boat builders and sailors and for their kayaks or baidarka, as the Russians called it.

Anthropologist classify the Alutiiq as an Eskimo people, as their culture and language are most closely related to those of the Yup’ik and Inupiaq. In prehistoric times, the Alutiiq shared many items of technology with other northern coastal peoples. They built sod houses which were lit by stone oil lamps. They hunted sea mammals from skin covered kayaks equipped with sophisticated harpoons. They wore waterproof clothing stitched from seal intestines, beach grass, and sinew. Additionally, the Alutiiq speak Alutiiq, one of six Eskimo languages.

Linguists estimate that the Aleut language separated from the earlier Eskimo languages 4,000 years ago. Anthropologists have classified the Alutiiq people into three basic groups:Chugachmiut or Chugach of the Prince William Sound area, Unegkurmiut of the lower Kenai Peninsula, and Koniagmiut or Koniag of the Kodiak Island and Alaska Peninsula. The suffix “miut” is added to names signifying “the people of” a certain place. Thus, each village has a name for its people and each regional area has a name for its people. The people of Kodiak Island, for example, were called Qikertarmiut meaning “people of the large island”.

The Aleut and Alutiiq people lived in numerous coastal villages as well as a few inland villages located on rivers and lakes. The Aleut and Alutiiq peoples are maritime people obtaining most of their food and livelihood from the sea. Each settlement had defined territories for harvesting resources such as seals, sea lions, halibut, cod, birds, plants and driftwood. Aleut settlements were, as a rule, located on bays where there was a good gravel beach for landing skin-covered watercraft. Village locations on necks between two bays were preferred, as such locations provided at least one protected landing for any given wind direction and served as an escape route in the event of enemy attack. A good supply of fresh water nearby was a necessity, as a good salmon stream was indispensable; other considerations were availability of driftwood and access to stone materials suitable for tool and weapon-making, mineral paints, sea mammal hauling grounds, and an elevated lookout post from which one could watch for enemies and whales.

Aleut lived in scattered villages, and the traditional houses of both cultures were semi-subterranean. The Alutiiq houses, called ciqlluaq, provided efficient protection from harsh weather conditions. For thousands of years, the house style consisted of a single room. The ulax, the basic Unangax Aleut house, is an oblong pit dwelling with wooden or whale bone frames and rafters covered by grass and sod. These dwellings were often hard to distinguish from the surrounding terrain. They were entered by means of a pole ladder through the ceiling.

The kayaks of the Aleut and Alutiiqs called, respectively, iqyax and qayaq, were distinguished from other sea craft by the split bow, which increased the seaworthiness and speed of the craft. They also used the igilax/angyaq (baidar), a large open skin boat, for travel and trade. Traveling was most often done by sea in these skin boats. However, people also walked long distances. For example, on Kodiak Island, remnants of the trails used by Alutiiq people to cross the island remain visible today. Besides nets, traps and weirs for fishing, people used wooden hooks and kelp or sinew lines. Today, salmon, halibut, octopus, shellfish, seal, sea lion, caribou, on the Alaska Peninsula, and deer remain important components of the Aleut and Alutiiq subsistence diet.

Due to the wet maritime climate, it was crucial to have waterproof clothing. Therefore, the garments made of skin and gut were sewn with incredible precision making them very effective against the wet weather. Clothing was decorated with colorful natural dyes, feathers and puffin beaks, and in some cases elaborately carved ivory, bone or wooden figurines. The Aleut and Alutiiq used various portions of sea mammals for clothing and other utensils. The skins of seal, sea lion, sea otter, bear, birds, squirrels, and marmots were all used for clothing items. Hats and baskets were woven from spruce roots and grass. Baskets were woven with geometric patterns, considered among the finest in the world with up to 2500 stitches per square inch. Women wove other goods: cords, cables and fish line from plant fibers and animal tissue. Aleut and Alutiiq hunters wore distinctive bentwood visors with sea lion whiskers. These visors provided protection from glare as well as a visual symbol of the status of the hunter. The number of sea lion whiskers attached showed the successes in hunting. At sea, Aleut men wore wooden hunting hats. The shape of the headgear indicated a man’s rank; a short visor was worn by the young and inexperienced hunters, an elongated visor by the rank-and-file, and open-crown long-visored hats by important mature men. Aleut men honored the sea mammal spirits by wearing highly decorated hunting costumes.

Aleut society was ranked, with hereditary classes of high nobles, commoners, and slaves. The leaders were recruited from the high nobles or the chiefly elite. This ranking was reflected in allocation of living space within the longhouse and in burials. The “east” and the “above” were the sacred dimensions associated with the creator – Agugux. At dawn Aleut men emerged on the rooftops of their houses and faced the east to greet the day and “swallow light.” They followed instructions of local Shamans regarding hunting taboos and coping with sickness.

Still important in Aleut and Alutiiq society are kinship and family relationships. These connections persist throughout the regions and are important in the management of the village, as well as decision-making related to everyday life. Today, many Elders reminisce about the past, mentioning the strong value of sharing and helping one another in the villages of their youth. Village members would punish those who violated the rules of conduct of the village. The most serious form of punishment was banishment.

In Aleut and Alutiiq cultures, the winter was a time for elaborate celebrations and ceremonies. Singing, dancing and feasting took place as part of these rituals. The festivals usually began in late fall after all the necessary food for the winter had been gathered and stored. The festivals and ceremonies were held in large communal houses, called the qasgiq, and generally fell into two types. First were those of a spiritual nature, which were necessary to guarantee continued good hunting and fishing, and second, social celebrations, such as those for marriages and other events. During ceremonies, performers often wore elaborate costumes, some specific to certain ceremonies. Carved wooden masks, some with complex attachments were used. People had tattoos and also wore body paints and other decorative items.

The Aleut and Alutiiq cultures were heavily influenced by the Russians, beginning in the 18th century. The Orthodox Church is prominent in every village, Russian dishes are made using local subsistence food, and Russian words are part of common vocabulary; although two languages, Unangax and Sugcestun, are their indigenous languages. Aleut hunting skills were exploited by Russian fur traders who came to the islands in search of sea otter, fur seals, and fox. Over the next 100 years the Aleut population declined because of sickness and harsh treatment. Today about 8,000 Aleuts remain; before contact with foreigners they had a population estimated at 12,000 to 25,000.